Ten teens walk into a room. They're captives to a high school lockdown, but no one knows the reason.

"No, the dogs would have already sniffed out something suspicious if it was only a locker search," says another - "must be a bomb threat. Or maybe a suicide?"

As speculations spread through word of mouth and hashtags, topics trend that leave some students pondering gossip's real-world implications, whether perpetuated in-person or over social media.

Such is the plot of The Time We Give Each Other, a new play penned by 14 middle-school and high-school students that premiered at two public readings on Friday. It's part of the Butterfly Project, a collaboration between Bryn Mawr's Wolf Performing Arts Center and Philadelphia Young Playwrights. The initiative launched in 2011, when children actors from Wolf PAC performed Celeste Raspanti's I Never Saw Another Butterfly at more than 70 schools and community centers over four years.

Staffers noticed that participants wanted to lend their own ideas to the artistic landscape, and in January they instigated a second installment of the project, in which teenagers were invited to apply for a chance to co-write a work that commented on modern sociocultural touchstones immediate to Generation Z.

"What we've tried to do is look at every side of a complicated subject," said Brandi Burgess, community and education outreach coordinator at Wolf PAC. "A big part of this play is about being teenagers in 2016, and how do we process trauma, how do we process crisis? And also, how do we exist in a room together with all of our social media? What assumptions do we make about each other? And what I think is great about having 14 unique playwrights is that all of our characters have such unique voices."

When students joined the effort in January, they were told only that they would be writing about identity. For months, they curated their own characters to represent themes that felt pertinent to them.

As a result, there are gender-neutral, homosexual, and homophobic roles. There are allusions to sexual assault - 15 percent of victims are between the ages of 12 and 17, making the topic urgent to the playwrights. With 5,400 suicide attempts each day among students grades 7 through 12, it's no surprise that self-harm comes up, too.

One character who may have taken her own life is in the closet; nationally, LGBTQ youth are at a higher risk of suicide than heteronormative colleagues.

There's even a light but poignant discussion about disability and ableism. What holds the threads together is a critical exploration of social media and how they rule our lives in the 21st century, especially for a generation which has never participated in a society without it. 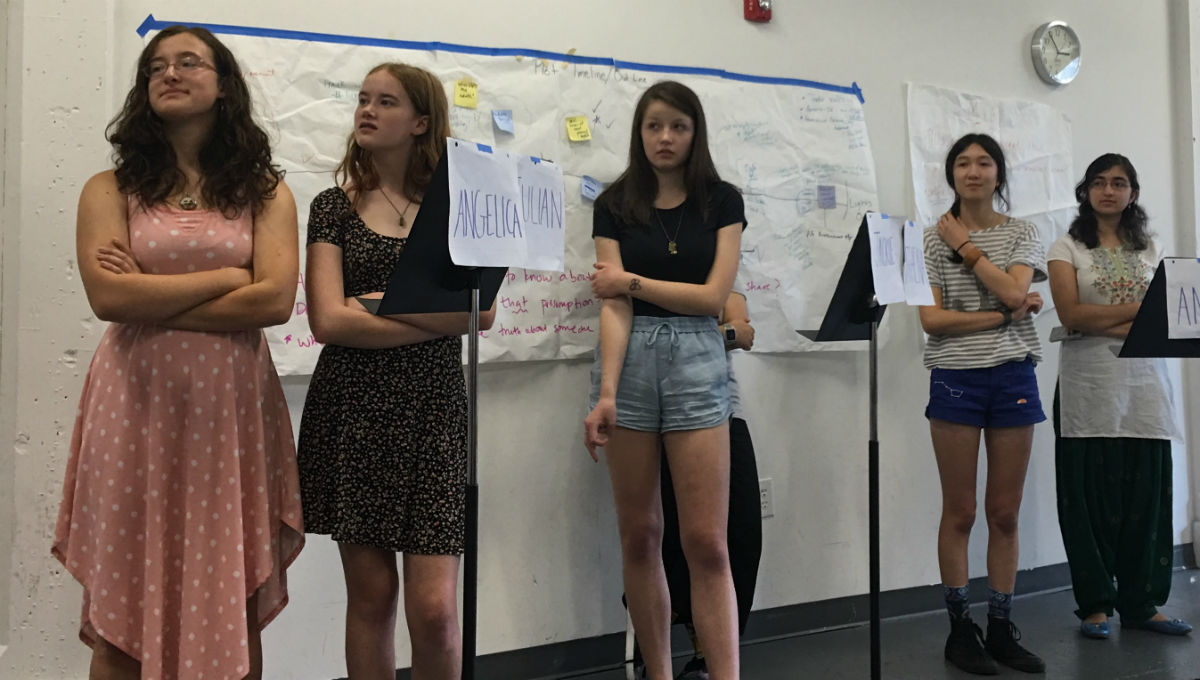 "I don't know what I'd do without social media and technology," said playwright Drew Weiss, a senior at Haverford High School. "You need it for school now. You need it for work. I think it's very important. However, I also think it can be very harmful.

"Actually, earlier this summer I did a program where I went to Alaska, and I had to disconnect from my phone for a month. And, honestly, I think that was the most liberating period that I've ever had. Now I very much look at social media differently as something that holds me back a little bit, because I feel that on social media I have to portray myself as this different person than I actually am."

His peer, Maya Peniazek of CAPA, spoke of "the distinction between me and my social media presence."

She said, however, that cyber-life is nearly inescapable: "It's where we are now. We are online. There are so many social media websites, and we have to adjust to that. Because the fact of the matter is, even if I wanted to go live in the middle of the forest alone with no reception and unplug my phone - as someone who's trying to be an artist, as someone who loves to connect with people, I'd have a really, really hard time without social media."

Still, when The Time We Give Each Other tours through at least 16 Philadelphia and Bryn Mawr venues starting in January, Peniazek wants to advocate a return to interpersonal communication.

"We all have a lot going on," she said. "But I think I'd love to just say to high-school students, and to myself, that in the midst of all the craziness, of all the social media, of all the horrible things that are happening in the world, we are always going to be able to turn to the person next to us and have a real and human moment."

Shop our collection of brand new apparel and gifts!

One-on-one with our theatre professionals!